In 1835, a route was established to connect Minneapolis and Anoka County with the military and trade goods called "Red River Ox Cart Trail." Around this path, in 1881, Dr. D.C. The first industry started with the construction of "Anoka Pressed Brick" and "Terra Cotta Company" established by Dunham. A large hole called "Clay Hole" dug to cut clay remains as one of the history of the Kunrapids industry. Red River Ox Cart Trail has been renamed "Coon Rapids Boulevard" and remains an important commercial road.

In 1912, the construction of the Coon Rapids dam started, and it was the first time that the population of 1,000 people was exceeded because many workers and engineers came into the area. The dam was completed in 1914 and became a hydroelectric power station in an important area by Northern States Power Company, but later sold to Hennepin County Park Board and became Coon Rapids Dam Regional Park.

When the dam was built, the name of the town was changed to "Coon Creek Rapids" and then to "Coon Rapids". In 1959, a referendum was held to change the village system to the city system, and the city was moved to the city. The population of 14,000 people in 1959 exceeded 62,000 in 2015 and became the 13th largest city in Minnesota. 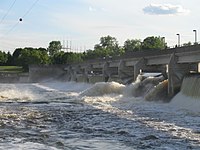 When steamboats used to sail the Koon Rapids on the Mississippi River as a commercial traffic under certain conditions to the north St. Cloud, the construction of Coon Rapids Dam was the northern end of the river basin where the town could be navigated.

U.S. National Route 10, Minnesota State Route 47 and 610 are the three main roads of the Koon Rapids. There is also a station called 'Coon Rapids Riverdale Station,' which is a commuter train that connects the downtown of Minneapolis from the northwest suburb of November 2009 called Northstar Commuter Rail.

According to the City's 2014 Comprehensive Annual Financial Report, the following companies have many employees in the city:

The Koon Rapids manages the city government under the City Manager system and the mayor is Jerry Koch as of 2017. The next election will be held in 2018.

In the 2012 election, the Minnesota State Assembly and the House of Representatives

The state legislature and senators are:

The following is true:

The Koon Rapids has a Anoka-Ramsey Community College, which offers a wide variety of programs including two-year and four-year programs, and in 2013, 754 associate doctorate degrees were awarded.